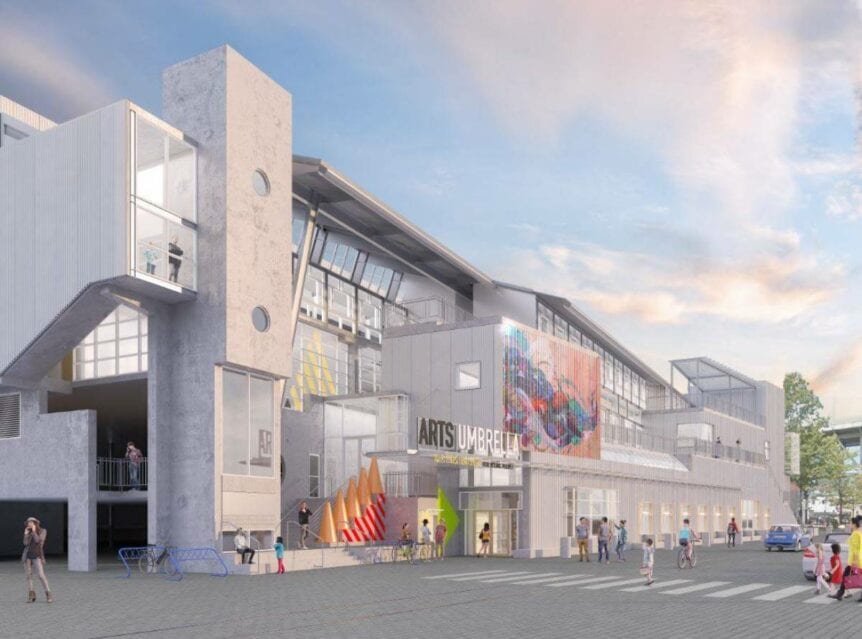 Beyond the construction fencing, Arts Umbrella’s vast new space on Granville Island is beginning to take true shape. And at the same time that the facility is getting ready to stage its ambitious end-of-the-year dance and theatre productions, it’s preparing for a major new chapter in its evolution

“It’s been fun to dream a space,” Arts Umbrella’s associate director of music and theatre, Andy Toth, tells the Straight on a hard-hat tour of the facility.

The massive project has meant trying to predict the future needs of the expanding program as it readies to move into the 50,000-square-foot site in Emily Carr University of Art + Design’s former South Building.

While planning for the theatre students’ upcoming Expressions Theatre Festival, Toth and his team of instructors have been giving input on the four new studios and 145-seat theatre they’ll have access to at a new space that’s double the size of the current Granville Island headquarters.

At one end of the four-floor building, in Henriquez Partners Architects’ massive renovation to the early-1990s design by Patkau Architects, that means a new theatre studio with a blue screen for film and video work. In a top-level space, it means a sprung floor, studio-style seating, and high ceilings: “They’re literally raising the roof for us here,” Toth enthuses, surveying the concrete top that will soon be lifted.

The new Arts Umbrella headquarters is slated to open in 2020, although the space likely won’t be ready for annual spring Expressions Festival stagings until 2021. Still, the site’s capacity for in-house and public performances will mark big growth for the theatre program. Workers are putting in a box office at the entrance to the building, and the theatre will provide for year-round programming—also as a venue for dance.