At Excellent Ice building, hockey among five sports to be offered at Glarea Elevated Learning

Nadia Hasan, a founding partner of Glarea Elevated Learning, inside Surrey’s Excellent Ice facility, where the new private school is due open in September of 2020. (Photo: Tom Zillich)

One ice arena in Surrey will soon expand to include a private school that incorporates education, sports and arts.

The look and feel of Excellent Ice will change with the addition of Glarea Elevated Learning, due open next September with a focus on what school administrators call Challenge Based Learning, or CBL.

Plans call for the Panorama-area building’s second floor to become classrooms for the new school, which will welcome students from Kindergarten to Grade 5 to start, with expansion to higher grades to follow in phases, as the redeveloped facility grows in size.

“The whole face of the building will change, and it looks amazing,” said Nadia Hasan, founding partner of the school and a South Surrey mother of three. 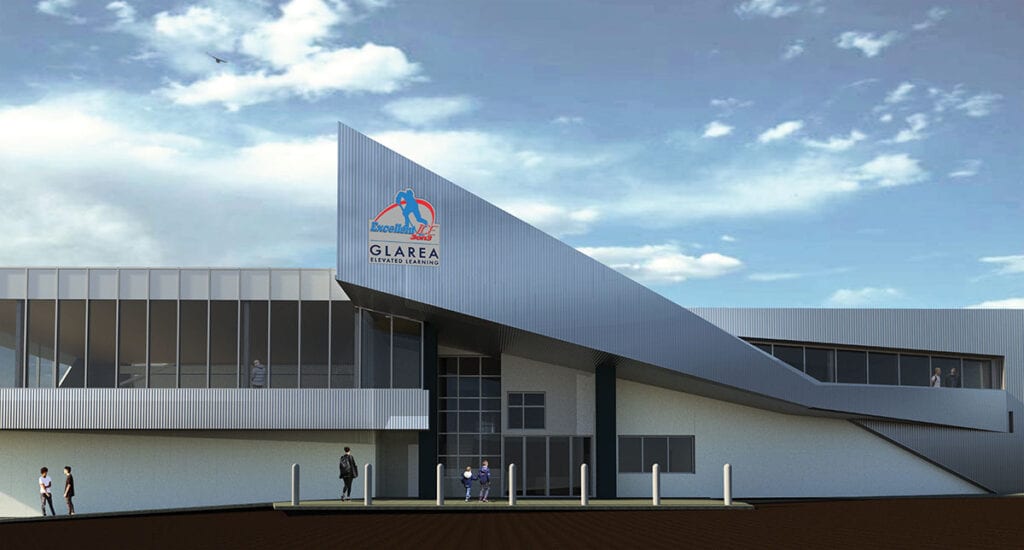 Artist rendering of the redeveloped Excellent Ice facility in Surrey, to include a new Private School In Surrey: Glarea Elevated Learning with classes on the second floor. (submitted image)

Sports “expert streams” will be offered at Glarea, including hockey, skating, soccer, volleyball and aquatics, in addition to ones focused on dance, theatre, music and other arts.

“We always start the conversation with, ‘It’s a school, it’s not a sports academy,’” she explained. “With the name, ‘grit’ resonated with us as businesspeople, and some of us are educators, as something we see is lacking in a lot of children – the idea of persistence and resilience, falling down and getting back up, being OK with failing, and having them learn through that.”

Glarea’s website describes Challenge Based Learning as “an educational approach to learning that uses Science, Technology, Engineering, the Arts and Mathematics as access points for guiding student inquiry, dialogue and critical thinking.”

WE ARE #GLAREANS. The #educational catalyst driving change and empowering #students to identify and pursue their unique purpose. https://t.co/i1m6N5m13g pic.twitter.com/I6MDvO8PvV

Signs advertising Glarea Elevated Learning are posted outside Excellent Ice, and on Friday painters worked to alter the look of the interior space.

The three-sheet arena, built and owned by Surrey-based Lark Group, has been in operation since 1999.

Kirk Fisher, senior vice-president of the development company, is a founding partner of Glarea Elevated Learning.

“We welcome this innovative school and its partners, like Arts Umbrella and sports experts like Jay Demerit, to be part of our expanded facility,” Fisher said in a release.

“As a proud community leader for the past 21 years, we’ve worked with thousands of families and kids through our hockey school program, and Learn to Skate program. We’ve wanted to add a formal education program and diversity into our sports culture and see A Private School In Surrey such as Glarea and Arts Umbrella, etc., as perfect partners. Personally, I see the combination of these businesses as a gritty catalyst to boldly elevate anyone who enters the program.”

Building expansion plans were revealed in a report to Surrey city council last February, with hockey originally a lone focus of the planned “academy,” but other sports have since been added.

“The building will be sharing names, and it will be home to both uses – the school and the arena,” Hasan said. “We’re figuring out our final signage and things like that right now.”

Glarea’s school hours will be longer than those at a typical school, and the initial intake calls for around 20 students per grade.

”It’ll be a smaller school environment, with lower student-to-teacher ratio as well, so it’s 120 students to start is what we’re planning for,” Hasan said.

“Grades will be added as kids age, all the way up to Grade 12 eventually, and that’s how we’re planning our phasing, in three phases of expansion,” Hasan said. “Depending on how we do and how many parents show interest, we may rush that phasing, but that’s the plan, adding one grade per year.”

Hasan said Glarea’s soccer program will be held at a park in the area, and gym space for volleyball is still being worked on, possibly at the nearby YMCA.