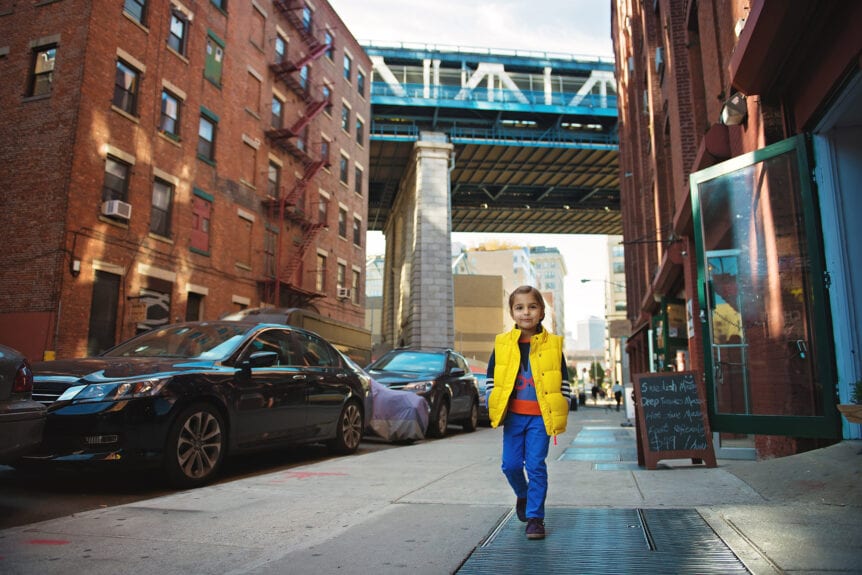 How old do you need to be to see a movie alone in New York City? I recently found out.

My daughter had been asking for permission to go to the movies with her friend. They are both 9 years old and fairly mature. I would drive them, buy the tickets and pick them up. It seemed reasonable to me.

By the time I was 9, growing up in a far more dangerous Brooklyn than is home to my children, I was going to the movies alone — and sometimes taking my 4-year-old brother with me.

My daughter spent days planning her mostly rainbow outfit. They were going to one of those fancy new theaters, the Nitehawk in Prospect Park, the kind where they take your ticket at your seat and you can eat a meal while you watch a film. She had perused the menu online and concluded she wanted a burger. I taught her about tipping and how to calculate 20 percent off the ­total. I walked the girls to their seats and left. She was ready.

As I drove away, I felt a mix of emotions. It’s hard to let go. She is my first baby, already growing up, alone in the world “out there.” Just then my phone vibrated. It was her. “Come get us. They won’t let us stay without a grown-up.”

I had read all of the work by ­Lenore Skenazy, founder of the Free-Range Kids and Let Grow movements, which encourage parents to let their kids be independent, and I was ready to set my kids free. Not all of my kids, of course — I’m not a crazy person. My 6-year-old and 3-year-old would remain by my side while my 9-year-old — smart, responsible and resourceful — would get just a dash of freedom.

The first time I let her go, at 7, three doors down to her cousin’s house, I watched from our doorway. A woman walked by and asked her if she needed help. She pointed in my direction, 15 feet behind her.

The woman marched over to me and lectured: “Be careful letting her walk down the street by herself in this day and age.”

But this “day and age” is actually an amazing and glorious day and age. We live in the safest time in human history. We have less war, less disease.

Crime has sharply dropped all over the country over the past 25 years. In 2018, New York City had a record low number of homicides, the lowest in 70 years.

These numbers don’t mean we should rest on our laurels or stop doing all the things that got us to this place of better safety, as some politicos insist.

And it certainly doesn’t mean we shouldn’t teach our kids vigilance and street smarts. Mine know to lock doors and not get in cars with candy-offering strangers. But it does mean we can feel better about loosening our grip just a little bit and letting our children have the independence that helps them become better-functioning adults.

When we hear stories of Millennials or Generation-Xers failing to “adult” — it’s a verb now — much of the blame for that belongs to their overweening parents.

When parents spend their lives doing everything for their children, including accompanying them to movies long after they can go on their own, kids naturally don’t learn how to be alone and do things for themselves.

But some of that blame can also be aimed at a society that discourages parents from letting their kids grow up.

We have bought into the idea that we are a village raising each other’s children, but the villagers all have different ideas on how to do it. I have had numerous other incidents of people telling me to shield my children from the horrid world.

When I send my 6-year-old to another aisle in the supermarket to grab me something, and he is told by another customer to “go find your grown-up” — I know she means well, but she needs to lay off.

Please, keep your village off my kids.