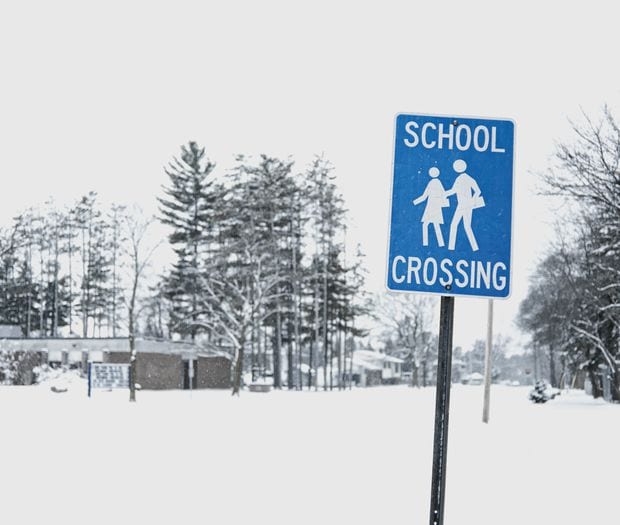 According to Ontario’s transit agency Metrolinx, the percentage of 11- to 13-year-old students walking to school within the Greater Toronto and Hamilton Area nearly halved between 1986 and 2016, while the number of kids being driven in cars has nearly tripled.

Naomi Buck is a freelance writer in Toronto.

As a kindergarten student in 1977, I set out every morning into the vastness of North Toronto. Having been ditched by my older brother at the first hill (he had a reputation to maintain), I would join dozens of other neighbourhood kids on the migration to school.

We walked – or biked – not to be virtuous or to make a statement or to get a sticker when we got there, but because it was the obvious thing to do.

A generation later, this seems like pure nostalgia. According to Ontario’s transit agency Metrolinx, the percentage of 11- to 13-year-old students walking to school within the Greater Toronto and Hamilton Area nearly halved between 1986 and 2016, while the number of kids being driven in cars has nearly tripled. The trend is consistent across the country; the national non-profit organization Participaction estimates that a mere fifth of Canadian school children now exclusively walk or bike to school. Cars are poised to become the prime mode of school transport.

Does it really matter? It’s just a trip to school. Times millions of children, times hundreds of days a year.

At the very least, it’s a lost opportunity: the imposition of adult logic – finding the fastest way from A to B – on newcomers to the world, who are much more interested in the puddles, people, plants and pretty much everything else that exists in between.

But the en masse decision to drive to school is also a problem. It diminishes the functionality of our cities (trips to school make up a fifth of morning rush-hour traffic in Toronto) the quality of the air and our claim to be taking climate change seriously. It is, in very real terms, bad for our kids.

The decline in active school transport, as the experts call it, has prompted a florescence of research correlating walking or cycling to school with everything from improved alertness to mental health, social competence and physical fitness. As our grandmothers could have told us: It’s good to start the day with a little fresh air and exercise.

And yet, we opt to drive. Why?

A 2015 survey conducted by the national injury-prevention charity Parachute revealed that parent’s prime concern with children walking to school was speeding cars and traffic, followed by abduction. Addressing these concerns by driving to school is questionable at best. In purely statistical terms, a child in Canada is more than four times more likely to die in a car collision than to be abducted by a stranger. And in driving to school, parents are only contributing to the congestion and real dangers of the streets.

It’s a paradox they can live with. “Parents frame traffic as a problem generated by others,” says Kate Berry, a civil engineer and director of the Ontario Active School Travel program. Funded by the Ministry of Education, with a goal “to achieve population-level change,” the program represents an escalation in the effort to combat the driving-to-school problem. It is running 28 model projects across the province – partnering with local public health authorities, municipalities, school boards and police to develop strategies to turn the driving tide.

This kind of co-ordinated approach is essential, as I learned in a futile two-year quest to have some kind of crosswalk or crossing guard installed in front of our local elementary school. On his first day of junior kindergarten, my four-year-old son stood opposite his school, surveying the mess of cars in front of it and asked where we were “supposed” to cross the street. Having spent his learning-to-walk years in Berlin, he was looking for the kind of designated crossing point he was used to: a stop sign, lines on the road, any indication that pedestrians were expected.

There was none – and there remains none. Crossing guards being the dominion of the police (at the time) and crosswalks being the dominion of the city, the two bureaucracies tossed responsibility for the issue back and forth until the school was ultimately demolished. In the meantime, kids continued to thread their way around double-parked and three-point-turning cars as the principal waded through the chaos in a fluorescent vest, trying to maintain order.

But while pedestrian infrastructure is critical, the most stubborn obstacle to walking to school may be the drivers themselves. Driving kids to school is part of a bigger picture, in which a generation of parents has prioritized structure and supervision in their children’s lives over freedom and independence. We’ve persuaded ourselves – and our children – that they’re better off in a bubble on wheels than risking whatever variables the outside world might throw at them.

The results have been stultifying; children aged 5 to 17 spend a daily average of three hours on screens, according to Statistics Canada, while only two out of five get the recommended hour of daily physical activity. They’ve also been debilitating: A third of the parents surveyed by Parachute cited their children’s lack of “maturity” as justification for driving them to school.

Maturity can be fostered, but not in the back seat of a car. Last year, Metrolinx commissioned a series of focus groups with parents in the Greater Toronto and Hamilton Area, to get a better fix on why they were opting to drive their kids (JK through Grade 8) to school – often a distance of less than 800 metres. A common theme to emerge was the “rush and stress” of the morning household, as kids failed to execute their routine – described by parents as showering, eating breakfast, assembling lunch, finding homework, packing knapsacks, gaming and texting – in time, leaving families “no choice” but to drive.

Whose failure is this really? It’s important to remember that certain subsets of children literally have no choice but to be driven: children with disabilities, or attending specialized programs far from home, or bouncing between split parents who live outside the school catchment.

Parents serve as role models, whether we like it or not. It doesn’t make sense for our kids to learn about the fragility of our planet in school, and then climb into idling SUVs to be driven to ballet. These habits are formative. As a growing number of climate-conscious Canadians reconsider eating beef and taking flights, it’s worth recognizing that, according to the federal government’s 2017 National Inventory Report on greenhouse gas sources, our preference for SUVs and pick-up trucks has made passenger vehicles a larger contributor to greenhouse gas emissions in this country than agriculture and air travel combined.

Changing behavioural norms requires carrots and sticks. So far, the carrots – initiatives such as ABC (Anything But a Car) days, where kids who walk get stickers, or campaigns such as International Walk to School Month (October) – don’t seem to be working. We need more sticks.

Ontario will see some as the Safer School Zones Act, which passed in 2017, starts to take effect, allowing municipalities to install photo radar cameras in school and community safety zones. Toronto Mayor John Tory hopes to have 50 up and running by the end of the year. A month-long pilot project conducted last fall at eight school zones across Toronto suggest they’ll be busy: At half of the locations, the majority of vehicles were exceeding the speed limit.

Schools should reconsider programs such as Kiss and Go – in which volunteers shuttle kids from backseats onto school playgrounds – that expedite the car drop-off and make driving an even more appealing option. In Germany, the rise of the Elterntaxi (parent taxi) has prompted some schools to create a 250-metre car-free zone around them, impelling kids who are driven to school to walk the last stretch.

This fall, Toronto-based non-profit 8 80 Cities, which advocates for inclusive urban design, is running two demonstration projects to give communities a sense of what is possible. In one, planter boxes were used to “pinch” the street in front of a North York school, slowing traffic and diverting commuters who had been using the street as a shortcut. In another, the street in front of a High Park school will be cut off to all vehicular traffic for the drop-off and pick-up hours, following a School Streets model developed in Britain.

“We’re so used to things being a certain way,” says Amanda O’Rourke, the executive director of 8 80 Cities. “We need to raise expectations.”

She’s right. We need to be reminded of the benefits of a less car-driven world. Getting there will require a concerted effort on the part of cities, schools and parents. If we stop treating our kids like precious backseat cargo, we give them a chance to be active participants in their world – and to make that world a more livable and lively place.

Source: The Globe and Mail